This summer, amidst other things (like an international move), my baby brother got married! Go Lil G! Seeing as I had volunteered to make bridesmaids dresses (little ones, flower girls for you North American folk) for my brother in law, under similar circumstances, I felt obliged to offer the same to my own brother. Of course, because I am a recovering overachiever I also offered to make outfits for the small boy attendants, assuming it would just be for my own three, and OF COURSE when told they were thinking of also having two more small boys there, I said to myself that making three tiny rompers could not be much more work than one, AND THEN, of course… I had some of the most beautiful Seasalt Cornwall (not sponsored, though I would gladly rave about them more if they wanted me to!) printed cotton voile in my stash waiting to be made into a lovely late summer dress, so obviously, I made my dress too. So that’s what we’re going to talk about first!

The fabric is sadly no longer available as it is a limited run, like all their fabrics. It’s so worth snagging them if you like a print though, because the quality is absolutely fantastic. The voile is light, crisp, but not transparent. The print goes right through to the wrong side, but is perfectly sharp. I still have a bit left and you will be seeing more of this, because it would be a crime to waste! 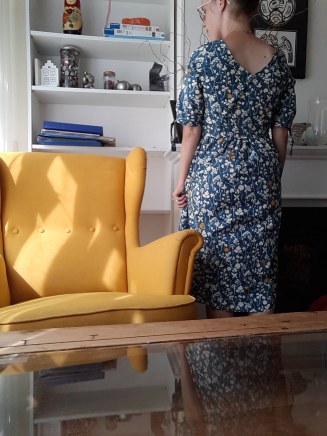 For the pattern I initially decided to keep life simple and do another Hinterland, this time with a slightly longer length and “maybe something with the sleeves” to make it a bit more formal. Then, a few days before I was set to start, Meg posted a tutorial to change the neckline to a V and move the darts around to the bottom and I thought, “oh! let’s do that!” and then…. well a back V is so pretty, “let’s do that too! and why not a flutter sleeve? or a tie on the sleeve? OH! and definitely it should have buttons all the way down.” And then, it wasn’t so simple anymore. Especially as my initial thought of simply using the pattern I had cut was out the window as my measurements now but me a solidly one to two sizes down from the previous iteration (thanks post partum/stress weightloss… not.) 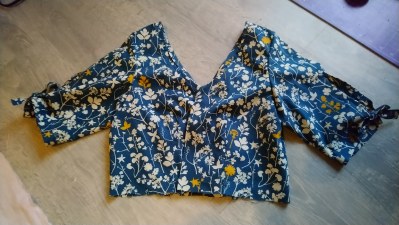 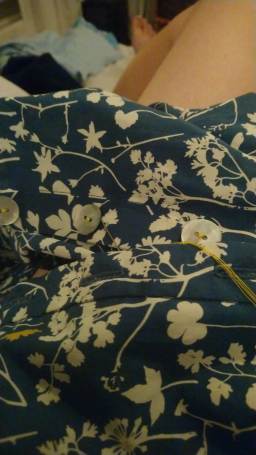 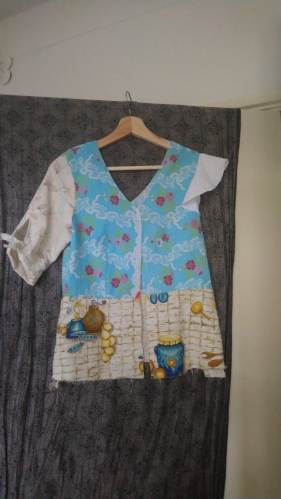 Several muslins (aka old bedsheets and curtains) and experiments and buttonholes later… It was a lovely dress to dance the night away in.

I like finding beautiful things and making them too! Currently raising a trio of Canadian kids (Sirocco age 6, Mistral age 4 and Chinook, the Dutch born 1 year old) in the UK with my husband Kyle. Academia is a fickle mistress, but we’re enjoying the adventures along the way. Glad you’re here – Enjoy!

It's weird weather today, trying to snow - but failing. Too wet and windy. A good day for staying inside and playing with trains.
Tasty things going down in the Oman household tonight. Pictured: @smittenkitchen Triple Coconut Cream Pie. Not pictured (because we ate them all): Monsterous quantities of baked enchiladas.
Spreading sunshine on the page. ☀ Enjoying the process. 💛

New little #overitalls for my little niece and new post #ontheblog. This pattern is really the loveliest and coziest outfit. Main fabric is fleece-backed terry from Jan Sikkes in Groningen and lining fabric is Avalana jersey from @1stforfabrics . Made a few little changes to (hopefully!) extend wear. #mbjmpatterns #1stforfabrics #sewingleftovers #sewingforgirls
It's basically been a week straight of illness around here and no sewing has gotten done. That clearly means it's time for some tutu spam, yes? #littlethingstosew #sewingforgirls #latergram #oliverands
I am much better at posting progress shots than finished items.... So, long overdue, here are those wedding outfits I had been working on this summer before all the moving country craziness. Details on a few of these are on the @oliverands blog today! ☺️
%d bloggers like this:
%d bloggers like this: