There have been some changes in our weekly rhythm (I think to the better!) in the last few weeks and between that and catching a cold, writing has been a bit harder to get to. Hopefully I can throw up something explaining the changes and the reasons and all that interesting (to me anyway) stuff. But for now, here’s what we’ve been able to do between some unexpected nice weather and our new schedule!

1 – Building things!
This is a campground. It’s pretty elaborate. Everyone, oddly, is sleeping, which rarely happens around here! I have mixed feelings about Playmobil… so. many. little. parts. But the characters and vehicles are cute and fun and the kids are massive fans, and do more story telling with them than any other toys, so it’s a win. 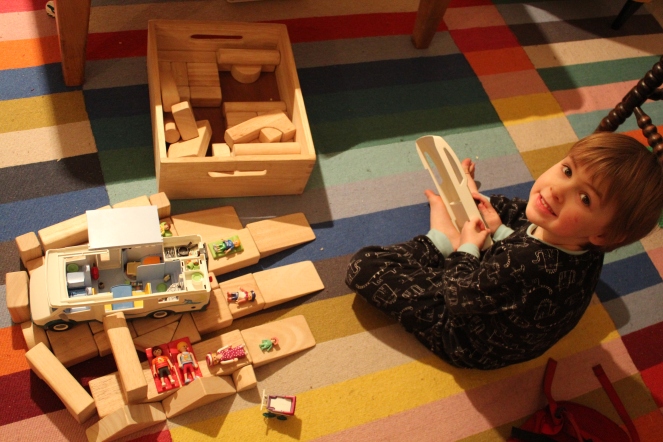 2 – Dressing up!
At home we have a big suitcase for costumes, which I try to switch up seasonally. Currently we have “parent” costumes which Mistral is wearing bits of (glasses, backpack, baby carrier, baby bottle) and pirate costumes to go with a wonderful boat curtain for their bunkbeds (thanks Mémère!). We are really lucky to also have a variety of dress up clothes at the big library downtown – here you see Sirocco as Willy Wonka the Postman… 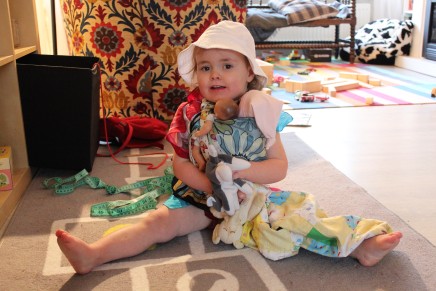 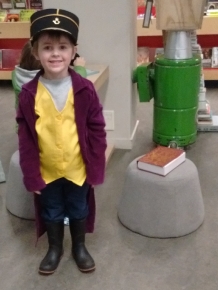 3 – Library time!
We really are blessed with some lovely libraries around here. The downtown one pictured above is a bit far and requires planning to get to, but there’s also a branch just down the street – which we hadn’t ever been in until this week! We had been TO it two or three times in the first few weeks we lived in town, but somehow it was always closed (the opening hours are only afternoons and not Sunday, which took 2 trips to discover then the third time there was a staff training, so it was closed again!). It turns out, they do in fact open, and it is lovely. Books, trains, colouring pages, and nice big windows looking on to an active demolition site. Mistral was especially excited about that last part – there were big machines eating rocks and sticks. Sirocco picked up a colouring sheet and then drew his own version of it and had me colour it. 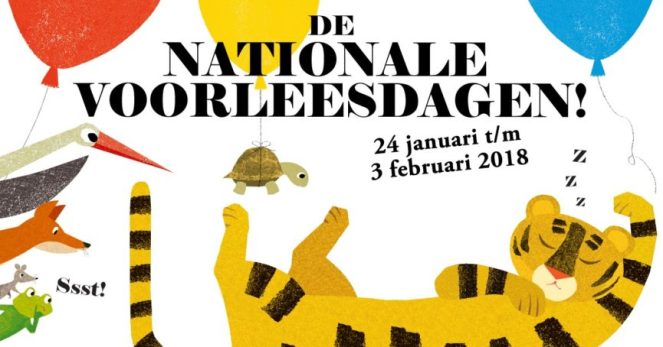 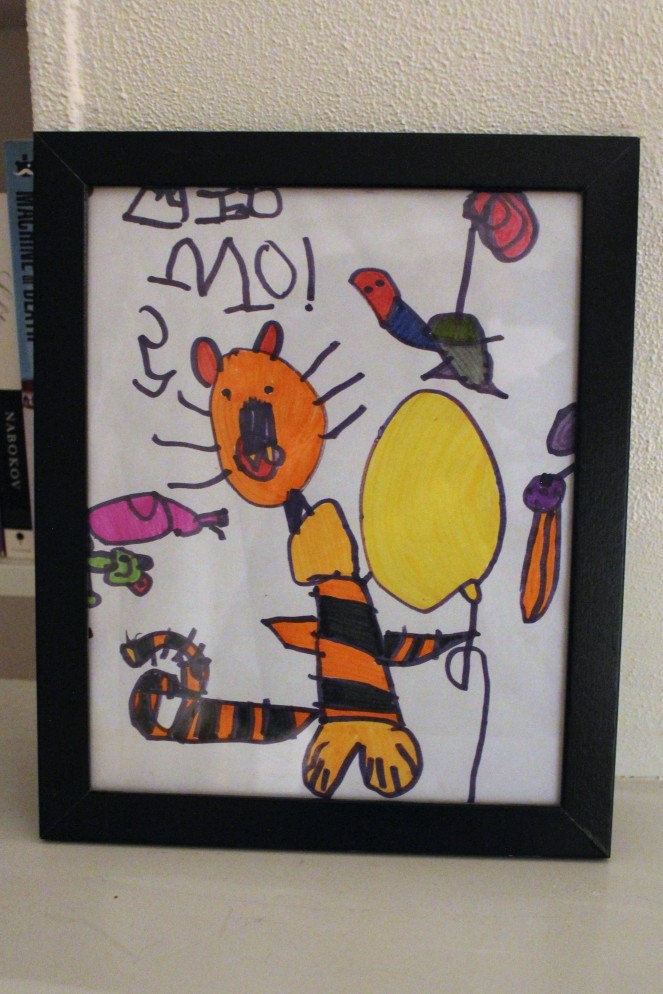 4 – Exploring our town!
There are some fun things to do if you’re ready to brave the wind on a 3 person bicycle… Including playing on the tractor-cum-play structure at the Kinderboerderij. 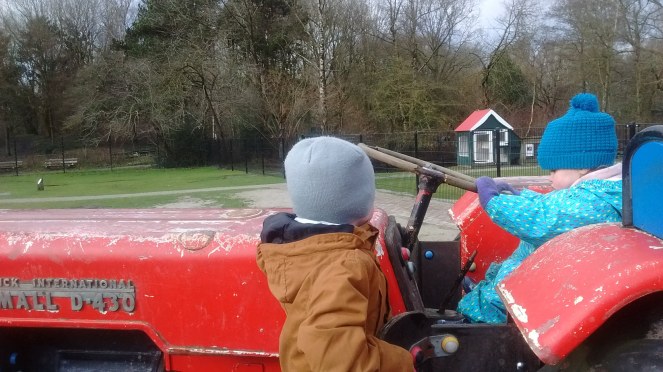 5 – Yarn bombing!
In this installment of my kids independently discovering odd pop cultural phenomena they are “building a boat” by wrapping our living room bench in a particularly ugly ball of yarn I was conned into buying “to keep until we have a cat”, which is to say, forever, because, sorry kids, we’re not getting a cat… 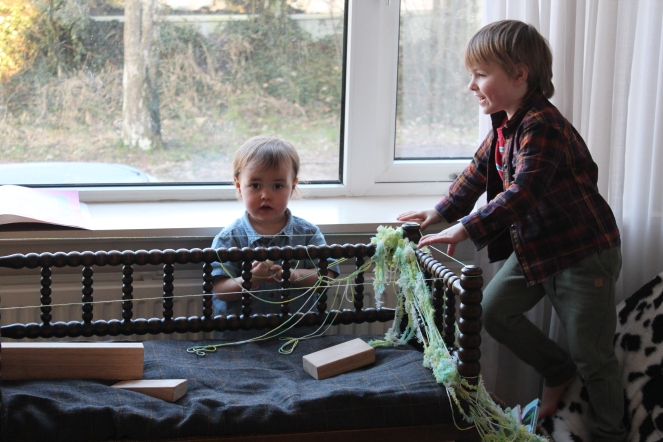 6 – Going on adventures!
We listened to The Hobbit (Le Hobbit, actually, but anyway…) for the first time with the kids – mostly for Sirocco’s benefit – over the Christmas break and it was an out of the park hit. He loved it. And now, he lives it. (And we’re on our second listen through.) And Mistral comes along riding on whatever is available, in the true spirit of those unfortunate recent movies (which they have NOT seen, don’t worry). 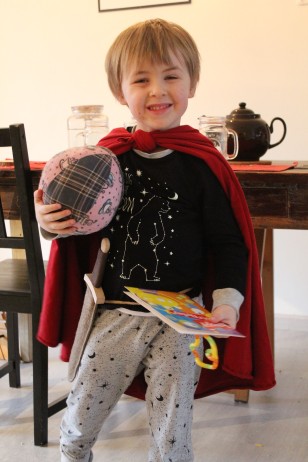 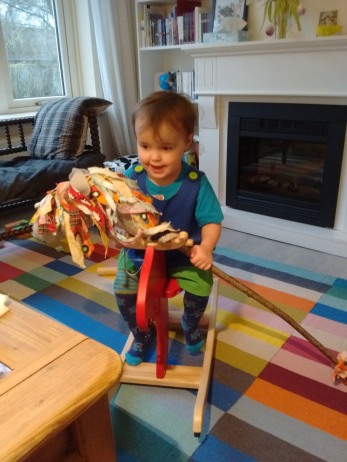 7 – Learning to focus!
As you can maybe tell from the pictures, and definitely know if you know us irl… these are a couple of rather active kids we have living here. There’s a reason they have wind names on this blog and neither are nice gentle breezes… But sometimes, something catches their interest and they take pride in doing it very well. And that’s really wonderful to see. 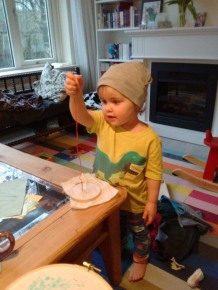 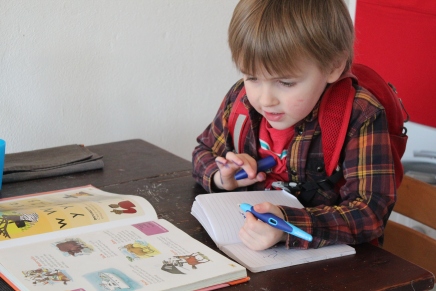 So, that’s what’s been happening around here, and now, we’re probably going to go into Olympic coma for the next little while… Do make sure to check out the other links at This Ain’t the Lyceum!  Especially if you’re looking for some particularly excellent vaLENTines day cards…

I like finding beautiful things and making them too! Currently raising a trio of Canadian kids (Sirocco age 9, Mistral age 7 and Chinook, the Dutch born 4 year old) in the UK with my husband Kyle. Academia is a fickle mistress, but we’re enjoying the adventures along the way. Glad you’re here – Enjoy!